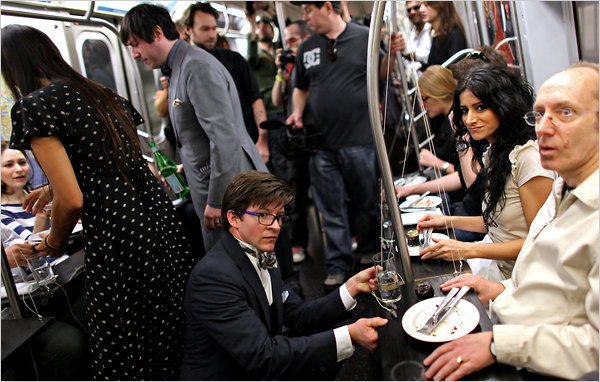 Photo from The New York Times

Rush hour or not, I daresay the L train is probably the least likely place I’d want to participate in (a) eating and (b) a showy NYT-covered stunt.  But they did one, and it looks like I’m not alone in thinking it wasn’t a great idea:

There was no sign of the police or even a conductor, but officials at the Metropolitan Transportation Authority, reached on Monday, were not amused. “A dinner party on the L train?” said Charles F. Seaton, a spokesman for the authority. “No. Subway trains are for riding, not for holding parties.”

If you have had the pleasure of living off the L train in the past 5 years, you’ve also had the pleasure of experiencing Williamsburg’s overpopulation problem’s finest side effect:  not being able to get on the damn train.  I would actually find it extremely funny to see what would happen to a party like this at 8:30am at Lorimer, but of course I love a good riot.

PS.  I wonder what grade this would receive from the health department?