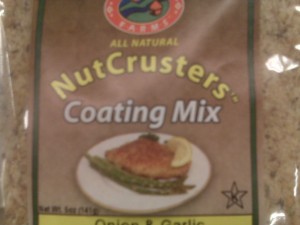 Spotted at Fairway today. And all this time I thought “nut crust” was Benign Prostatic Hyperplasia Tissue. Prostatic!

If the concept doesn’t put you off, available here!

Answer: Four so far! But it’s only been an hour.

They’re like the 80s South Africa of America! And now, a diner serving lion. LION. Oh but they are “free range.”

Restaurant owner Cameron Selogie said: “We thought that since the World Cup was in Africa … that the lion burger might be interesting for some of our more adventurous customers.

“But most of them, when we tell them the facts, that this is farm raised and it doesn’t hurt the endangered animals, seem pretty reasonable.”

The mission was simple. Turn Janet Jackson’s breast into a work of edible art.

Granted, this is from 2004, but it is so unbelievably offensive that it just feels fresh!

I’ve always been fascinated by ortolan eaters, who are so ashamed of what they are doing that part of the ritual involves eating with napkins or masks covering their faces. Ortolans are tiny birds, which are captured alive, force-fed, drowned in brandy, and then cooked and eaten whole. It’s kind of sick and gross (and illegal) , but the birds are at least dead.

Dead isn’t good enough for the cutesy New York Gastronaut© society, whose members get together every once in a while to eat “live octopus, live lobster, and other aquatic unmentionables.”

Other members of “Adventurous Eating Clubs” do things like organize human placenta dinners. The AP reports on a Denver chapter:

The group’s next meal at Opus restaurant will include frog curry, pork brain lettuce wraps and balut — a fertilized duck egg, poached or deep-fried, that contains a partially formed embryo.

One attendee, upon reading the menu, sent a message to Emanuel: “You had me at embryo.”

While some may find the eating of brains and embryos unsavory, Emanuel said the point of adventurous eating for many is to try something new, not to get involved in the ethics of eating.

“It’s not for me to judge whether or not it’s right or wrong,” he said. “How else are you going to be exposed to these bits and pieces of culture?”

Really, how else? I hate them.