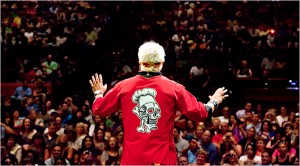 Guy Fieri, Chef-Dude, Is in the House / NYT / Julia Moskin

I’ve recently discovered the jaw-dropping Twitter feed of Natalie Zarzour, proprietor of Pasticceria Natalina, “an Italian pastry shop featuring Sicilian specialties” in Chicago. It’s amazing! I pulled out some choice ones. (A few are edited for capitalization.):

Foodie Blogging is the worst thing that’s happened to food since industrialization. 97% of ‘em are just blind leading the blind. And that 97% is responsible for the pussification of chefs and restaurantuers, (and all those of us who do food for a living.)

After all, if eating’s your hobby, u can no longer see your own toes, & can’t even fuck well, ur not a foodie – just an insatiable glutton.

And why do we embrace cheap meals? Low prices are just a screaming red flag that something is very wrong. Especially with ethnic foods. Take Asian for example: prepared in a traditional manner that is both delicious and nutritious, it should be very expensive in Chicago.

A note to all the breeders out there: a movement toward sustainable agriculture will go nowhere if we continue to overpopulate the planet.

Opinions r like assholes: everybody’s got one! A good chef should care about public opinion as much as they’d enjoy sniffing your dirty ass.

Holy Sweeney Todd, Batman! Furthermore, Ms. Zarzour has an issue with another local pastry chef, Sarah Levy. After asking, “Why is someone who bakes at the proficiency level of a soccer mom needed to instruct soccer moms on how to bake anyways?” on Twitter, she told Grub Street Chicago that Ms. Levy “is putting out really generic, low-quality items. I feel like it’s some of the least-inspired, most generic and uninteresting stuff that I have ever seen.” She also semi-accused the other chef of orchestrating vandalism. Tell us what you really think, Natalina!

I should disclose that I found Natalina’s Twitter because I was googling “Shut Up Foodies” (Oh, like you don’t do it as well.) and found a discussion of it on LTH Forum, “the Chicago-based culinary chat site.” Although I can’t for the life of me figure out what LTH stands for—“Less Than Hungry?” “Love That Hospital?” “Let’s Talk Heatedly?”—they have a  thoughtful and lengthy discussion of pasticceria posts that is worth checking out.

I am of two minds about this. On the one hand, of course I love anyone who is unbalanced and outspoken. On the other hand, her elitism, misogyny, ableism, sizeism, opinions on ethnicities that aren’t her own, and theories about up-the-ass-getting are pretty repellent. What I do know is we are now subscribed to her Twitter feed.