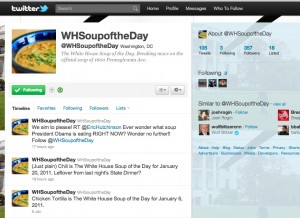 I know I’m not alone in thinking this is fascinating.

I’m guessing the best possible answer to this is probably not “I’d gnaw through my ankle and beat my firstborn with my severed foot.”

I mean, what would you do?  I doubt you can beat that.  With a foot.

Worth posting as a jpeg rather than a retweet.

It’s like we’re one and the same, Ruth Bourdain.

Her posts cover esoteric foods eaten at New York restaurants or food and quotidian minutiae or food and the beauty of nature plus how totally awesome life is.

A very awkward sentence in WWD today regarding Ruth Reichl’s tweeting habits.  Is the “or” supposed to be “of”, or is Nick Axelrod being really, really funny?

This is so a-mooo-sing! First of all, a completely fascinating farm thing—Buttermine Farms in Ontario, CA turned their cows into robots by implanting RFIDs in them and setting up what’s called a Voluntary Milking System:

As a cow approaches the robotic milking pen, the computer reads the tag and determines whether or not the cow is scheduled to be milked, based on her stage of lactation and average daily output. If the cow is ready for milking, she is allowed into the pen. Once inside, a robotic arm washes her teats, latches on, and extracts the milk while the cow eats high-grade feed to make her happy. The milk output and feed input is recorded by the main computer and stored in a database, along with the total milking time, time/teat, and total time in pen. The farmer enters additional information into the database, such as a when a cow gives birth, becomes ill, or is sent for slaughter.

Some artistes decided they wanted in on the action, so they added a Twitter node to the network. Because everything tastes better with social media!

They picked out twelve cows, developed a persona for each one, and created a Twitter feed. Now we can all treat ourselves to updates like these, from Attention Please, Contrast Amanda, and Mortyfy, respectively:

10.3 kg of pure nourishment, with the help of Robot 101.”for thee Brim high the snowy milking-pail”

I can’t wait to see what they twitter from the slaughterhouse.

So, as our journey into foodie-dom continues, I have to say, I am getting a leetle bit frightened.  I feel as though I understand the enemy so much more these days, and my knowledge of all things whackadoo edible is growing quite quickly.  But Colicchio’s latest tweet regarding his regret over not ever being able to see Jeff Buckley?  I mean, how “my only love sprung from my only hate” is this!?  Mr. Colicchio, I think we could be fast friends.  Dammit!

Now that’s some love!  What’s next – 7 minutes in heaven with the rump roast?

Pardon me, I need to get out the trusty pregnant nun costume.