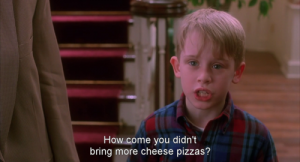 The LA Times says, “This is not a joke.” The Mirror calls Macauley’s take on Warhol’s eating a hamburger but with pizza, “deeply weird.” Noisey says the video shoot “smells like ass. A very doughy take on ass anyway.”  Stereogum added the final coup d’etat, “Yeezus? Fuck that, meet Cheezus.”

The Pizza Underground. I wanna see you live. I’ll borrow my girl Beyonce’s pizza getup and y’all better get ready. 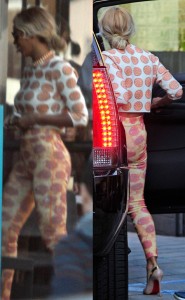 I’d say we all put our pizza pants on one leg at a time, but this is Beyonce, and she surely has some extra special, surprise! the pants are on at midnight! sort of way to dress herself. If I wore this outfit, I’d be ridiculed in the streets, but this is Beyonce, and she looks both quirky and fabulous, all at once. Does Beyonce even eat pizza? An article on E! points out that Bey is now vegan (for the time being), so the pizza clothing is a shock, a SHOCK!

You know who does eat pizza? Katy Perry, in the bathtub, which I discovered watching “Part of Me” (so what, I watch documentaries of questionable content on Saturday mornings). And while searching for the scene, I discovered loads of people have saved the scene, and left off her head. So that’s disturbing – do people get off on this? Gross. Looks like it’s only safe to wear pizza pants, not eat pizza in the bathtub. 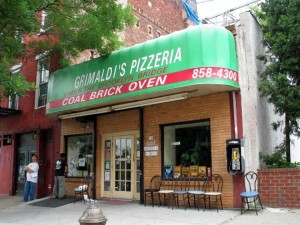 The owner of Grimaldi’s in Brooklyn has been served with eviction papers.  Dorothy Waxman says her tenant, Frank Ciolli, owes her $44,000.  Ciolli disputes how much he owes Waxman and says he paid his rent on time “for the most part.”

Have no fear, pizza/sceney folks – they’re moving to Manhattan anyway.  Seems kinda funny that the epitome of NYC pizza is getting kicked out for back rent, though.  It just makes it… so much more New Yorky.

Now it just seems shady.  What the hell has been going on over there?

Found at 30 Bizarre Examples of Defacing Money – this one is by Hanna von Goeler.

While a three-hour rise yields a crust that has the pasty pallor of raw flour, the caramelized sugars from an overnight rise give the cornicione, or edge, a color that goes from golden brown to the deep bronze of a ’70s tan.

Oliver Strand, on his pizza ala George Hamilton, in the Times. After reading that, the news from Slashfood that there are now vending machines that make pizza is a little less exciting. But think about it. Dirty underwear and pizza? Throw in a couple of beers and that’s Saturday night!

And if you want a more literary evening, check out these cigarette machines being repurposed as book vendors, which is pretty rad. —Snacktime

I’ve written before of my love for the @PDXFoodieCritic Twitter account and its strange fascination with pizza delivery crimes across the nation. Well, today was a big day because a pizza person fought back and won. According to the local newscast, Scott Parsons, of Pennington County, South Dakota, suffered a broken leg when he was attacked but managed to shoot the perp in the back as the villain fled. Police later apprehended the guy when he sought medical help for his gunshot wound.

I don’t wish to make light of crime or gunfights, but I am imagining the heart of PDXFoodieCritic smiling today. However, if you’d like to read more about South Dakota’s gun laws (note on the link that the anchor mentions other shootings the same night) check out this Wikipedia page. There’s also this scary open carry discussion page.

What could be more locavore than going outside, getting some indigenous wildlife and putting it on your pizza? That’s just what folks in Mildura, Australia, did when they suffered a plague of locusts this year. It makes sense—when life gives you locusts, make locust pizza!

There is no reason foodies all over can’t adopt this pest-foraging to include the snails, worms, and other urban snacks they come across in the urban jungle. No need for chickens in the backyard when you’ve got ants in the kitchen, right? Or you could use locusts to expand your knowledge of world cuisine. The Desert Locust Information Service, part of the Migratory Pests Group, has several recipes, including ones from Cambodia and Swaziland.

[T]ake several dozen locust adults, preferably females, slit the abdomen lengthwise and stuff a peanut inside. Then lightly grill the locusts in a wok or hot frying pan, adding a little oil and salt to taste. Be careful not to overcook or burn them.

I applaud Mayor Greg Milne for working to elevate the lowly locust, and I think he has a good chance of making them into a hot commodity. Nothing attracts foodies like scarcity, and locusts only come every seven years. That’s less often than ramps!

One of the Twitter accounts we signed up to follow is @PDXFoodieCritic. I admit that I figured it would be comedy gold. I mean come on, Portland. But it’s actually not obnoxious—it’s not even usually about food! PDXFoodie mourns sea lions who die in captivity, posts the occasional Medifast advertisement, and is concerned with what local Girl Scouts are up to.

One food-related topic they do cover extensively is crimes involving pizza delivery people. Which is not at all funny but it is sort of weird that they are so on top of it internationally. I am picturing some guy in with a police scanner and an algorithm that knows “pizza” in every language. Check it out:

Pizza Hut Worker Robbed During Delivery|A pizza delivery man gets robbed during a routine day of work. .. http://oohja.com/xaeNY     11:19 AM Apr 6th  via API

Harlem Man Fights Robbers While Delivering Pizza|A pizza deliveryman went the extra mile and then some in order .. http://oohja.com/xaeoG     9:16 AM Apr 6th  via API

PDXFoodieCritic!! You are a mystery unto me. The bio says “Food and Restaurant Critic for Oregon specializing in Portland Italian, Pizza, Mexican, Thai, Korean, Food Carts, Casual Dining, and Trendy Portland Restaurants,” but there is no URL. Actually I don’t even want to know the truth. Long after SUF fades away, I will still be following these people. Peeps Pizza from Serious Eats on 4/2.