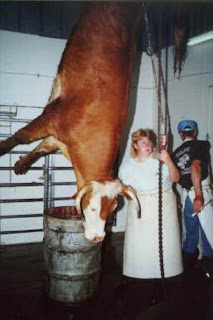 As if books and blogs weren’t enough, foodies are now seriously being awful. A Times story today stunned us with the news that “There has been a recent rise in street corner slaughterhouses and urban animal husbandry.” JFC! and KFC! DID NO ONE READ THE JUNGLE BUT ME?

Kentucky Fried Cruelty is allegedly testing a new sandwich at select stores. What kind of sandwich? Try “5 layers of fried chicken skin, lumped on a bun and topped with white american cheese and bacon.” Mmmm, I can already feel my intestines trying to escape out my butthole.

It’s amusing that people are so outraged by how many calories the Double Down has, given that there are at least ten fattier drinks at Starbucks.

Eater.com responding to the Physicians Committee for Responsible Medicine demands to keep the Double Down away from schools and add warning labels to their packaging.

While I find the Double Down grody, I find the (vegan) Physicians Committee ridiculous.  Tobacco-level warnings for this damn sandwich?  Really?

No one else needs to comment again. It’s done.

In response to a piece on the rise of fast food chains in France (KFC will have 300 stores there in a few years):

Scientists at Rolls Royce built a gun specifically to launch dead chickens at the windshields of airliners and military jets all travelling at maximum velocity. The idea was to simulate the frequent incidents of collisions with airborne fowl to test the strength of the windshields.

American engineers heard about the gun and were eager to test it on the windshields of their new high speed trains. Arrangements were made, and a gun was sent to the American engineers. When the gun was fired, the engineers stood shocked as the chicken hurled out of the barrel, crashed into the shatterproof shield, smashed it to smithereens, blasted through the control console, snapped the engineer’s back-rest in two and embedded itself in the back wall of the cabin like an arrow shot from a bow..

The horrified engineers sent Rolls Royce the disastrous results of the experiment, along with the designs of the windshield and begged the British scientists for suggestions.

Rolls Royce responded with a one-line memo: Defrost the chicken..

Pardon me, I just vomited in my original Double Down.

So KFC has a new sandwich out that is a trending topic on Twitter! You may have heard about it here, even. Not many people have said they really want to eat a Double Down, except Sam “Bright Eyes” Sifton, but it’s not made to be eaten, it’s made to start conversations. The Double Down the foodie version of Nike’s Tiger Woods ad—repulsive,  but it gets people talking about your brand. I mean, before today,when was the last time you even thought about KFC?

This is a product that’s not just gross materially, it’s gross conceptually. This certainly isn’t the usual foodie-fodder, but in case you’re around regular people, or maybe even those who delight in fast food because they find it ironic, The Consumerist reminds us that April 12 is going to be a God-forsaken BACON-FREE-FOR-ALL.  Run for your lives – this is two pieces of KFC fried chicken serving as the bread for a bacon & cheese sandwich.

I wonder if there will be stampedes.