Senator Tom Coburn (R-Oklahoma) wants to know if Congress has the right to tell Americans what to eat!

He thinks that’s a crazy idea. But he’s A-OK with telling gays they can’t marry, telling women they can’t have abortions, so I wouldn’t put it past him. –Snacktime

The NYT writes about a study today that suggests (the sample was only 20 people) metabolic factors affect decision-making–in short, hungry people take bigger risks. As one person pointed out in the comments, it seems to make evolutionary sense. If you’re full, no need to chase after that scary woolly mammoth or hike into unknown territory. If you’re hungry, it might seem worthwhile.

I was intrigued that the Times chose to frame their discussion of the findings in terms of  wealthy finance-industry players, writing, “Maybe what Wall Street’s risk-loving bankers really need is a better diet.” They even had a picture of a fat cat!

Really, New York Times? Exactly how hungry do you think people on Wall Street are? I’m guessing: Not at all. Is there any evidence at all that rich folks are hungry, other than maybe those on diets? The Times is all hahah, maybe we can blame the financial meltdown on this! It’s so telling to me that they didn’t think that perhaps hunger made the victims of Wall Street more vulnerable to the hucksterism and shady dealings of sub-prime predators.

The study itself used purchasing lottery tickets as its measure of risk-taking behavior. The subjects who were hungry chose riskier odds. Hmm, who plays the lottery in real life? It is disproportionately people with lower incomes. A Carnegie-Mellon study found that (surprise), those with fewer resources are more desperate for changes in their circumstances and find the concept of a lottery appealing, because, in theory, anyone can win.

We know the brain needs food. That’s why school lunch programs and making sure children eat breakfast are so important. That’s why we support NYC’s free meal program for children under 18. That’s why we were dismayed to read today that so many states and municipalities are cutting such programs, especially during a time of economic crisis. Because we are a lot more worried about kids going hungry than we are about bankers missing a meal.

Gothamist reports on this year’s 4th of July / Nathan’s Hot Dog Eating Contest – first of all, no Kobayashi, which is a bummer.  But secondly, no vuvuzelas!  Thank god someone is nixing those noisemakers.  I personally would like to throw all into a boiling cauldron of hate, creating the perfect plug for the oil spill.

I hereby declare our independence from vuvuzelas! The food world is so bloodthirsty lately! Many of my San Francisco friends are fans of Ike’s Place, a sandwich joint in the Castro. Ike’s Place is currently dealing with some neighbors attempting to shut the business down–Eater has devoted no less than eight posts on the topic. The court date is tomorrow! But the Eater coverage pales in comparison to this guy, who breathlessly blogged:

I feel like this is San Francisco’s OJ Simpson Trial.  If the food bloggers were the jurors, Ike’s would get off, bloody baguette and all.

Uh, wow.  He also says he has never even been there! However, I almost forgive him for comparing the closing of  a sandwich shop to the slaughter of two people, because he pointed us to the fantastic comments on this vegansaurus post.  The original poster is very gung ho, issuing a rallying cry for people to support Ike’s Place, but his readers are more interested in discussing karma (mean people work at Ike’s) and the fact that someone PhotoShopped Keanu Reeves into the photo above. Yeah, I don’t get it either.–Snacktime

We’ve been getting a lot of nutty right-wing communiques lately, so I thought I’d send this out to them.

By the brilliant Jen Sorenson. 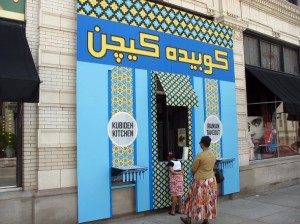 Welcome to Conflict Kitchen’s first iteration, Kubideh Kitchen. Conflict Kitchen is a take-out restaurant that only serves cuisine from countries that the United States is in conflict with. The food is served out of a take-out style storefront, which will rotate identities every 4 months to highlight another country.  Each Conflict Kitchen iteration will be augmented by events, performances, and discussion about the the culture, politics, and issues at stake with each county we focus on.

So, I am assuming over the next few months/year, the kitchen will rotate cuisines from around the world, where the US has hostile/conflicting relations with.  Interesting concept – it definitely raises awareness for political involvement.  I’m actually intrigued to see what’s next. 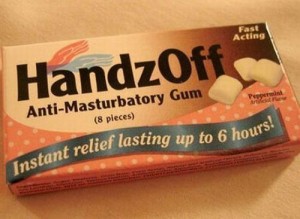 Handz-Off Anti-Masturbatory Gum!  Finally!  A solution for all of us!

When a food blogger goes too far, a chef goes to the dark side.

Mario Batali is in it!

I’m so psyched I found this! Jeffrey Vallance is a completely  rad artist, if you don’t know who he is, you should read up on him and buy every book you can and go see his shows. Before he made it big, he did a show at the Los Angeles Museum of Art. He dressed up like a janitor and went in and replaced all of the light plates and electrical outlets with ones that he had painted on, then stood out in front of the museum and handed out guides to his show.

Not only does he have a deadly sense of fun, he is also super nice. Back when I was a punk-rock zinester, we wanted to write about him and he and his gallery owner (Margo Leavin) were so kind to us and treated us like serious art critics, with a private viewing and a big interview even though he was even then a pretty famous guy. I never knew he was on Letterman, which is hilarious in and of itself. Check it out–and yes, there is a food tie-in.

Children 18 and under can get a free breakfast and lunch all summer, via the New York City Human Resources Administration. A list of sites is here. All children are eligible, regardless if income, citizen status, or school enrollment. You don’t need to sign up, and no id or documents are required. Children can go to any site.

This is a great thing. Please spread the word bec I bet a lot of people don’t know about it. This is why I pay taxes.